the National play at House Of Blues, Wednesday, October 6th.

The National/Owen Pallett at HOB 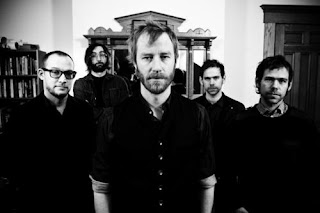 Light a candle, put on a suit jacket and order a glass of red wine: The National are coming back to town! I caught their last show in Orlando, at the Social in September 2007, and it was a memorable experience. Their music is brooding but still warm, and when they play live they’re joined by a few friends playing trumpets and horns, so the sound is even more grandiose. It filled the Social perfectly, and I would imagine that in the much bigger room at the House of Blues, they’ll sound even better. Also, this is their only Florida date all year, so you can rub it in the faces of your friends in other cities.

I know that the primary criticisms thrown at the band are that they’re too dark and/or too boring. For me, it’s the little touches in their songs that really make them interesting and exceptional: the way the drums clatter in on the chorus to ‘Terrible Love’, the thrilling ending to ‘Brainy’, the way everything gets faster and faster before the triumphant final chorus on ‘Mr. November’, the huge fanfare that sees out ‘England’… I guess what I’m saying is, this is a band that knows how to end a song.

This time around they’re promoting ‘High Violet’, which can be officially called “a smash” since it charted at #3. Not on the “alternative” chart, but the real-deal Billboard Album Chart, rubbing shoulders with Ladies Antebellum and Gaga. With its tales of vampires, swarms of bees, spiders, nuns and geeks, this is their densest, most evocative album yet. I hesitate to say “best”, since ‘Boxer’ knocked both my shoes and my socks off, but ‘High Violet’ is certainly not far behind, and neither is ‘Alligator’. The National have always been good about playing older songs in their sets, so whenever you got into the band, you’ll hear songs you love. To get into the mood, check out their set from this summer’s Bonnaroo, which is streaming over at NPR.

Opening the show is Owen Pallett, a guy who until recently went by the name Final Fantasy, until the video game people presumably threatened to sue him to kingdom come. You may have seen him at the Social last year – his live shows involve lots of looped effects and drum machines, plus his voice and his violin. The shows can be described as “experimental”, which means they’re not for everyone, but I think he’s pretty good, and well worth getting to the venue in time for.

The National and Owen Pallett play the House of Blues next Wednesday, October 6th.
Tickets are available online.