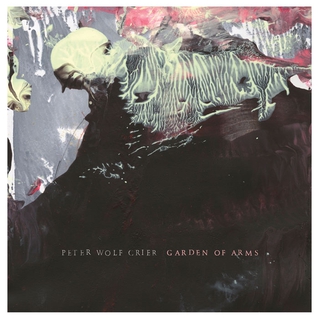 For their 2010 debut Inter-Be, Peter Pisano and Brian Moen of Peter Wolf Crier sat down and, in one night, churned out a series of solid, vintage-sounding folk songs. Then, the Minneapolis duo played 100 shows in a six-month span and– with “a new-found footing of confidence and experimentation,” according to the press release– sat down and recorded Garden of Arms. The confidence in their new record is clear, if only because their vocals sound more boisterous than ever, but for the most part, the experimentation is the problem.

Keep in mind that “experimentation” for Peter Wolf Crier doesn’t mean a Steve Reich or some dense soundscape. Instead, they needlessly streamlined their sound, creating the feel of a locationless, generic rock band. They’ve effectively replaced the old radio warmth of Inter-Be‘s “Crutch & Cane” with an emotionless electric guitar on “Beach” that brings to mind Audioslave-era Tom Morello. For percussion, they’ve opted for a militaristic snare that does little more than distract from every other layer. And while the vocals are more confident, the melodies are interchangeable.

The opener, “Right Away”, sets the tone with its repetitive, claustrophobic vocal treatment. The lyrics offer a collage of emotions that never seem to connect: Lines like “All the inches flow” and “Right away you are the one” hint at something meaningful, but never taking the time to provide actual meaning. Even when the emotions are clear, Pisano’s melodramatic belting detracts from the weight of the heartbreak. High drama seems to be the aim of Garden of Arms, especially when you consider the majority of the lyrics are comprised of over-the-top emotional imagery like “Lonely gardener it is time you woke the knight/ Kiss divine and hold his lips to your own light.” (Song titles like “Haunt You” don’t help.)

There are some welcome turns. “Beach” features an overarching percussion that sounds like swishing water, and the most satisfying moment on the track “Hard Heart” comes at the end, where a chorus of ethereal vocals serve as percussive accents. “Cut a Hand” makes a return to the muffled guitar warmth of their debut, and Pisano’s vocals are markedly toned down, but again, the song is covered in Moen’s heavy snares. Conversely, one of the best songs, “Settling It Off“, tempers the melodrama of the lyrics with quiet percussion, tender vocals, and a simple fingerpicked guitar.

It isn’t until the final two tracks that their departure from Inter-Be pays off. On “Never Meant to Love You”, Pisano sounds exhausted, perhaps from all the belting. There are still poetic analogies– dead leaves and drought to evoke the end of a relationship– but the instruments gradually get quieter. His vocals fade, and his regret turns to silence. The final track “Wheel” features even fewer instruments: The song’s mainly backed by ghostly moans, the album devolving into a quiet static shuffle. It’s a far cry from the clutter of “Right Away” and a welcome respite from the melodrama, making clear that the band is capable of great things in its new form.