Life On The Run: Back in Colorado.

…I walked around a bit and then rested in a grassy area and waited for a FREE Paul Thorn concert that was put on by the Crested Butte Center for the Arts.  Thorn played on an outdoor stage while the crowd of about 2500 sat in lawn chairs and on blankets in a large grass field.  The warmth of the brightly shining sun balanced the cool, dry breeze to create an ideal atmosphere for an outdoor concert among those mountains. It was simply awesome! 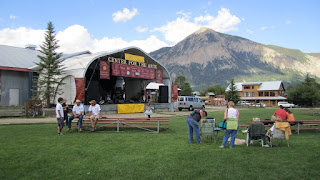 Crested Butte concert area before the crowd moved in

Most of the people in the crowd did not know who Paul Thorn was before last night, but I’ll bet they don’t soon forget him or his music.  There were hundreds of people dancing before he was finished.  In fact, the crowd continually warmed to Thorn’s music and from-the-heart stories as he moved from rowdy numbers to sensitive ballads.  Thorn had that crowd in such a frenzy that I believe he could have kept playing for a couple hours longer without loosing a soul.  Again, it was an awesome concert.