It’s a new Dia for ‘The Voice’ star 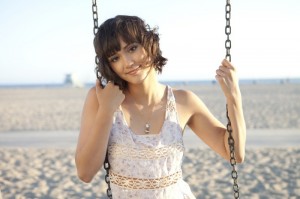 Courtesy of Dia Frampton Singer-songwriter Dia Frampton, who finished as runner-up on the inaugural season of singing competition “The Voice,” was surprised by her success on the program.

Dia Frampton – The Broken Ones

Dia Frampton, who finished as the runner-up on the inaugural season of “The Voice,” never pictured herself auditioning for a television singing competition — let alone making the finals.

“To be honest, I never thought a singer like me was good enough for shows like ‘(American) Idol,’” said Frampton, 24, who performs at the Majestic Theatre on Tuesday, Jan. 17. “They want big numbers. They want belters. They want people who can hold notes out for about 30 seconds. And that was never my thing. Like, if it was Disney week on ‘Idol’ and they wanted me to belt out the ‘Aladdin’ theme song, I would have problems.”

At the time of her “Voice” callback, Frampton — who experienced a bit of early career success in 2007 when her band Meg & Dia signed with Warner Bros. Records — had been contemplating leaving the music industry altogether. Meg & Dia had just self-financed the recording of its fourth album, “Cocoon,” after being dropped by its label, and a brief headlining tour supporting the release found the musicians playing to ever-dwindling crowds.

“There were some nights where there were 17 kids there,” said Frampton, who formed the band with her sister Meg in 2004. “We were all feeling pretty low about ourselves. It was getting to the point where people were like, ‘You guys have to come back down to reality.’”

At the onset, Frampton viewed “The Voice” as a way to promote the group’s new record — a tack that caused additional stress as she struggled through the early rounds of the competition. Even her audition song, a cover of Colbie Caillat’s “Bubbly” the singer now describes as “safe,” only won over two of the show’s four judges. She landed on a team helmed by country singer Blake Shelton.

Frampton’s fortunes finally changed in week seven with a smart take on Kanye West’s “Heartless” that showcased her sweet vocals, unique phrasing and general pop sensibilities. In judging, Christina Aguilera remarked, “Tonight I saw the fighter come out in you,” an outpouring that continued once Frampton exited the stage.

“I wasn’t expecting that reaction at all, and I remember I got offstage and one of the girls was like, ‘It’s trending!’ And I was like, ‘What does that mean?’” said the singer, who has since brushed up on her Twitter lingo (for Twitter newbies, that means Frampton’s song was a popular topic of chatter on the social networking service).

“I was shocked because I wasn’t ready for that…and then I got excited. I scared myself with that, too, because I’d always said, ‘Don’t get too excited because this could all turn into nothing.’”

That level-headed approach, forged in part by Meg & Dia’s past flirtations with major label success, carried over into Frampton’s solo debut, “Red” (Universal Republic). Unlike most albums released by reality show contestants, Frampton was careful to preserve her own voice on “Red,” and she estimates she wrote 90% of the album’s lyrics.

“With these TV shows, it’s usually like somebody wins and then a team of amazing songwriters get together in a room and try to write her hit song after hit song,” she said. “I’ve always been a writer, and I’ve always wanted to be involved in the process.”

This has been true since childhood, when Frampton started penning her own songs as a means to keep up with older sister Meg.

“There was a lot of sister jealousy because I’d be singing a Dixie Chicks song and she’d walk in and be like, ‘Listen mom and dad. This is a song I just wrote,’” said Frampton. “I was like, ‘What the…’”

The singer’s first attempts at songwriting were exceedingly dark. She penned one song about a drunk driver struggling with remorse after killing a family in an auto accident. A second song, “Molly Says Hi,” comes across like an unfilmed plot from “American Horror Story,” unravelling the tale of a young girl who is visited by a deceased sibling. “Red,” which could comfortably be described as a catchy pop record, maintains this grim undercurrent, with songs touching on everything from child molestation to divorce to suicide.

“I like telling stories, and even when I write short stories on my blog they’re all kind of weird and dark,” said Frampton. “I’ve even been reading all these sad, dark books (she points to Charles Bukowski as a current favorite).

“That’s why I finally decided I wanted to read ‘Harry Potter.’ It’s like I needed something fun and light and not so serious.”