Pitchfork: Interpol Do “Barricade” on “Letterman”.

Interpol Do “Barricade” on “Letterman” 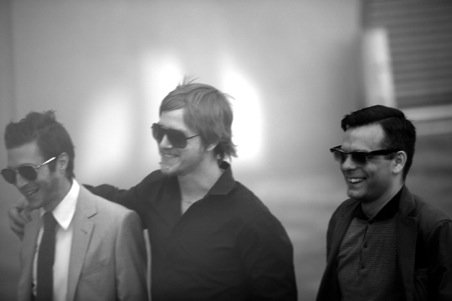 You might’ve heard that NYC gloom merchants Interpol have a new, self-titled record coming out September 7 via Matador. You also might’ve grabbed the album’s second “single”, “Barricade“, when it hit iTunes a while back. Well, Interpol played “Barricade” on the “Late Show With David Letterman” last night, so a lot more people have heard that song now.

The guys capably performed the mid-tempo chugger, with frontman Paul Banks rocking the inside-sunglasses-plus-a-tan look that sorta made him look like Liam Gallagher (if Liam Gallagher lived in Florida, that is). Kinda weird seeing Interpol with Dave Pajo instead of Carlos D, though.

Good old Letterman seemed to like the performance, even if he made a few jokes about buying the album when he comes out (he probably won’t). Check out video below via Consequence of Sound— and if you’re looking for an uncomfortable moment, skip to 3:50 when Interpol’s new keyboardist Brandon Curtis (of Secret Machines) goes for a handshake with Letterman and gets totally blown off. Awkward!