Pitchfork: Album Reviews: Darren Hanlon: I Will Love You at All. 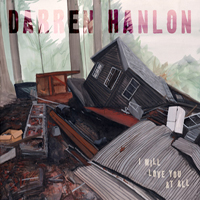 If you’re a fan of painstaking songcraft, there’s a good chance you’ve brushed across Darren Hanlon’s name before. The avuncular Australian came up in the 1990s as a member of the Simpletons and played on a bunch of recordings by much-loved countrymen the Lucksmiths. In the course of releasing three fine solo albums over the past decade, Hanlon has toured with Billy Bragg, the Magnetic Fields, and Jeffrey Lewis. With enough wry charm and vivid detail to withstand such comparisons, Hanlon’s unassuming brand of indie-pop digs up the mundane or eccentric and scrapes off the dirt until he hits on something universal. Until now, however, he’s never enjoyed a proper U.S. promotional push.

Each of Hanlon’s albums has moments worth revisiting, but I Will Love You at All is his most consistently rewarding effort yet. Not only because, as befits the self-described “urban folk” singer’s leap from Melbourne’s now-defunct Candle Records to North Carolina-based Yep Roc, it’s also his most American: Adam Selzer (M. Ward, She & Him, the Decemberists) recorded the album in Portland, so there’s a familiarly Pacific Northwestern tint, not least in longtime Selzer collaborator Rachel Blumberg’s meticulously understated drumming. What most sets Hanlon’s fourth album apart from its predecessors, though, is that he’s no longer singing about squash or the noisy punk-rock girl upstairs; when he shows off his tremendous wit, it’s now in subtler and more lasting ways than proving he can shoehorn the word “aubergine” into a catchy song. This is a record of heartbreak, rendered richly enough that you might not notice it. It’s also an immensely funny record, with enough real emotion behind it that you might not notice that, either.

It doesn’t hurt that there’s a lot more variety between songs than you expect from your typical heart-on-sleeve troubadour– or, hell, from most bands in this era of tinier and tinier niches. Ukulele, euphonium, and strings enliven “All These Things”, an affecting call-and-response duet with Shelley Short about the trivia that comes to define us. “Scenes From a Separation” depicts beautifully just what its title says, but with keyboards, a waltzing-Matilda rhythm and more backing vocals from both Short and Alia Farah. Opener “Butterfly Bones”, about someone who injures easily, sets viola, trumpet, and hammered percussion over syncopated acoustic chords; “Buy Me Presents” rattles like the Modern Lovers’ “Roadrunner” amid bongos, saxophone, and sly observations about fear of commitment. Only grandiose piano ballad “What Can We Say?” feels like a relative misstep.

As on records by anyone from Loudon Wainwright III to Jens Lekman, it’s Hanlon’s distinctive narrative vision that holds it all together, rewarding the attention this album requires. Nearly eight-minute centerpiece “House” isn’t the album’s best track– that’s “Folk Insomnia”, a stripped-down jaunt about broken hearts and growing older– but it’s the best encapsulation of Hanlon’s gift for funny, pathos-laden detail. There’s a terrible Barenaked Ladies song called “The Old Apartment”, where they do little more than state the obvious: “This is where we used to live.” Here, Hanlon does just about the opposite, documenting all his idiosyncratic thoughts as he debates going into an old home, notices the wall’s new color– “the horror!”– and finally comes to terms with the changes, in a crescendo of guitar and Blumberg’s drums. Memories, Hanlon concludes, are “best if they’re left in a place you can’t find them.” If I Will Love You at All is Hanlon’s “mature” album, then maturing is less about embracing the flux than accepting it, moving on to the next misadventure, and then sharing stories about it all over beers.