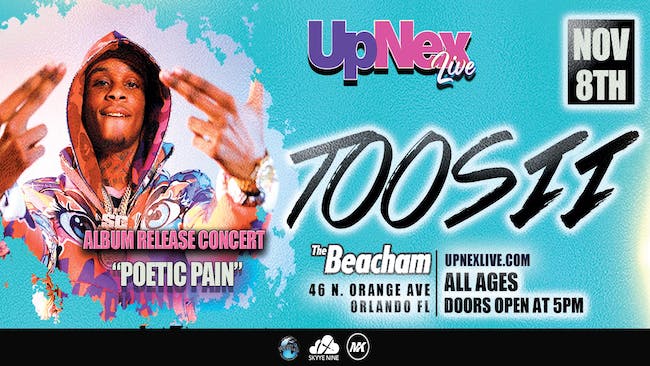 North Carolina rapper Toosii quickly developed his craft throughout the late 2000s, going from uploading songs online to signing on with the label that helped DaBaby break through worldwide. His lyrics often draw on more intimate details of his personal life than standard rap fare, and he delivers them with a melodic sensibility on projects like 2019's Who Dat.

Toosii (sometimes known as King Toosii) was born Nau'Jour Grainger in 2000. He grew up in Syracuse, New York but relocated to Raleigh when he began taking music more seriously in 2017. After posting some various projects online, he released the Why Not Now EP, a collection that saw his melodic, autobiographical style solidifying. By this point Toosii had generated enough buzz through both his music and a large social media following to attract the attention of the South Coast Music Group. He signed with the label and released 2019 mixtape Who Dat, following it early the next year with studio album Platinum Heart (February 2020). A consolidation of the rapper's infectious melodic style, the project was bolstered by a deluxe edition in May 2020, with 7 new tracks and a fully re-ordered track listing.

UPNEX LIVE is a concert series that combines a live radio style interview with a concert experience, UpNexLive, is a unique platform for emerging artists visiting the city of Orlando, Centering around the headlined artist, UpNexLive concert series includes a live performance, a live interview, and gives the fans of the headliner an exclusive opportunity to ask the headliner questions during a personable Q&A segment. Our past shows include Tyla Yaweh, Doja Cat, and Rod Wave.

"As a DJ, I wanted to create a multi-platform experience that could have a huge impact on the success of an artist's career," states UpNexLive creator, Krista "DJ MK" Wilkins. With her understanding and application of the importance of media exposure for developing new artists, UpNexLive has previously featured rising artists, Tyla Yaweh and Doja Cat.

UpNexLive is the perfect opportunity to add value on a press run or for an artist needing to build a core audience in the Central Florida region.