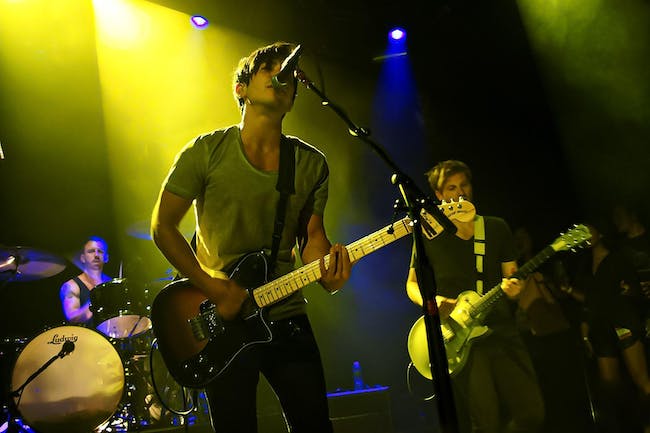 Never Loved, Silence of You

What To Do When You Are Dead, Armor For Sleep’s second installment is a record that will breathe new life into the carcass of thought provoking albums that has been lying on the side of the road which is the post hardcore/emo/rock whatever scene for years. Through the prism of buzz bands that flash and burn in dirty clubs under piles of screaming kids who will denounce them a month later it gets harder for words like longevity and individuality, originality and endurance to surface in the wash of MP3’s and P2P’s that carry them to spread and deletion.

In every band stickered corner in every smoke filled club from New York to California, Armor For Sleep has been showcasing their unique sound to thousands of kids who show up religiously and repeatedly to sing every word almost to the point of absurdity. In the past two years they have supported Fall Out Boy, Taking Back Sunday, Midtown, From Autumn To Ashes, Further Seems Forever, Bane and countless others. They have also done their own full U.S. headlining tours. If the last two years have been only a prelude to what the band is ultimately capable of, and if the success of their debut album Dream To Make Believe is any indication, Armor For Sleep is destined for canonization in the fluctuating music genre they have helped to create from the ground up. “We have seen our friends bands blow up overnight,” says singer/songwriter/guitar player Ben Jorgensen, “and we’re always happy for them. We have just been working hard focusing on our sound and touring nonstop until we are so close to the brink of insanity that it hurts.” Bands grow. Whether it’s constant touring, self-reflection, or just being jaded from the crap bombarding modern rock radio, bands mature.

“We’re not afraid to write the songs we want to write,” Jorgensen said, admitting that the band was a little timid with their debut album. After working with producer Machine (Clutch, Lamb of God, White Zombie, King Crimson, Vision of Disorder) in an assortment of studios in Hoboken, New Jersey for two months, Armor For Sleep emerged with the 11-song album equipped with their signature evocative vocals, and hauntingly catchy melodies. Noted for his work with progressive metal bands, it was Machine’s first time producing a band with a sound like Armor For Sleep, and what came out of it is sure to bring a new kind of reverence to the rock and roll community.

With the first lines “Believe the news / I’m gone for good,” of the opening track, “Car Underwater,” listening to the album is like taking the hand of a ghost as he guides you around to the different people and places he likes to check up on, and in doing so, tells you the story of his life. Digging deeper into the musical styles of their genre, what comes out of What To Do When You Are Dead seems less like an experiment and more like what happens when everything just clicks and gears start turning by themselves, creating an album that promises to shine like fresh flowers on the gravesite of an industry of regenerated soulless music to fall asleep to.

What To Do When You Are Dead offers the perfect balance between a self-contained concept album and a powerful collection of songs, completely unaware of each other’s existence. “We wanted this record to be a record where each song could be listened to individually,” Jorgensen says “But still have a story flickering through every song, pointing the listener down the path we’ve paved for them.” Where Dream To Make Believe dealt very much with time and space, What To Do When You Are Dead moves in cinematic scenes through the passage of life and death. The lyrics have the band’s original literary presence that makes this album feel like every line was specifically written to fit with every guitar note, bass line and drum beat in perfect cadence.

As the album moves from an actual death, to being in heaven and alone, to floating above the trees of a hometown and walking as a ghost through a graveyard, Armor For Sleep encompasses the feelings so inherent with youth. The feelings of loneliness, of social suicide, and of being an outsider conveyed in their songs put them in time with the music, and in the category of bands that connect with an entire generation, something the bigger bands of today seem to fall short of. But don’t expect them to realize the power they have over the people listening to their records. “We are just doing what we love,” Jorgensen says, “what never crosses our minds is what other people will like… we just write music and I just write words that make me feel something in my gut. That is our only platform and always will be.” The sound is delicate and combustible, using both clean and distorted guitar tones with a lot of slide power chords and punctuating notes that appear like gunfire across the appropriate tracks. The lyrics are meticulously crafted, smart and well placed and Jorgensen’s voice is soaked with reverberation and infectious melody that can be both calm at times or impetuously turbulent.

The ancient Greeks never wrote obituaries. Instead they asked only one question: Did they have passion? After their major success in such a short time, it is obvious that Armor For Sleep has a positive answer for that question. What To Do When You Are Dead is that answer.